The Kid and David Caruso!, originally uploaded by aeromat.

CSI: Miami filming in Long Beach, CA. The rest of the pictures can be seen here.

UPDATE: I took The Kid to go and see Monsters vs. Aliens today with some passes I had left over. It’s a good thing we didn’t pay for the movie–we ended up leaving about 45 minutes into it which, in hindsight, wasn’t a bad thing.

While on the way to the theatre, I noticed those ubiquitous yellow signs that we here in southern California are so familiar with. After leaving the movie I decided to follow them and see where we ended up.

They lead to a location just south of Mother’s Beach. Once we turned the corner we saw all the production trucks and yes, that Miami-Dade Hummer that always seems to follow me. You know, the one with the California license plate? That one.

Anyhoo, we parked across the street from the location and walked up to the Hummer so I could take a shot of The Kid standing next to it. Then from out of his trailer comes David Caruso to join us.

“Wait, I have a better idea,” he said as he approached. “I’ll sit here on the bumper with you.” He shook our hands, asked The Kid his name, posed for the picture, was courteous the whole time.

After I snapped the picture above he said, “Hang on, I got something for you.” Caruso headed back into his trailer for a few minutes and returned with the following: 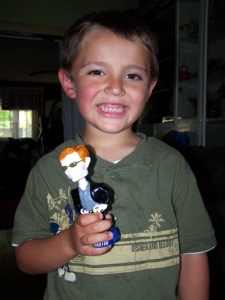 A “Horatio” bobblehead and two autographed CSI: Miami cards! Needless to say, The Kid was happy about his newly acquired goodies. Afterwards, Caruso wished us a Happy Easter, told The Kid not to eat too much candy then changed his mind, saying “he’s a kid, after all.”

The guy was very cool about things and it was a pleaure to meet him if only for a few minutes. Thanks for making our day, Mr. Caruso!

11 thoughts on “The Kid and David Caruso!”